Styela clava is a solitary sea squirt with a leathery, bumpy and often wrinkled outer skin that is yellowish or dark brown. It commonly grows to 8-12 cm long, with the largest reported specimens reaching 20 cm. Its overall shape is club-like, with a cylindrical body that tapers either abruptly or gradually to a sturdy stalk attached to rock, wood, shell or some other hard surface. The base of the stalk sometimes spreads out into a thin plate, up to 2.5 cm across, encrusting the surface. Young specimens—up to 1-3 cm long—have no stalk, so the base of the cylindrical body attaches directly to the substrate. The upper or head end of Styela clava is typically covered with many rounded bumps and swellings and irregular ridges. There are fewer or none of these toward the hind end; instead there may be creases running lengthwise along the stalk and the hind third or half of the body. Styela clava is often thickly covered with other organisms growing on its skin, including algae, sponges, hydroids, bryozoans and solitary and colonial sea squirts.

There are two openings at Styela clava's head end, at the ends of short tubes called siphons. Styela clava pumps water in though one opening, called the oral aperture, strains out food particles (tiny organisms and detritus), and then pumps the water out through the other opening, the atrial aperture. These siphons and apertures can be clearly seen when the animal is immersed and actively feeding, but may be inconspicuous when it is out of the water and contracted. The siphons have 4 purple or brown longitudinal stripes, often alternating with 4 paler stripes.

When mature specimens are dissected open along the plane that runs through the two siphons, several sets of elongate gonads can be seen, usually 2-4 (sometimes 5) on one side, and 5-7 (sometimes as few as 4 or as many as 9) on the other side.

Styela clava can breed in water temperatures above 15° C and salinities above 25-26 ppt. Like all sea squirts, it is hermaphroditic, but its male and female gonads mature at different times so it is not self-fertile. In California, Styela clava spawns between early spring and autumn, releasing both eggs and sperm into the water. Eggs and larvae are planktonic for no more than 1-2 days before settling to the bottom, attaching and metamorphosing. Styela clava matures at 3-10 months in some parts of the world, and may live 1-3 years.

Styela clava is common on rocks, floats and pilings in protected waters, and on oyster and mussel shells, and is occasionally found on seaweeds. It mainly occurs in the low intertidal to shallow subtidal zones, rarely to 25 m depth. In various parts of the world it has been reported reaching densities up to 500-1,500 adults per square meter. It is sometimes found in higher energy outer coast areas on rocks or pilings on partially protected surfaces. It has become established in parts of the world with annual ranges of water temperature that go as low as -2° C and as high as 23° C, and on the Pacific Coast it has been collected at ambient water temperatures of 11-27° C and salinities of 22-36 ppt. Adults die in salinities below 10 ppt, and larvae below 18 ppt. Larvae are eaten by fish, newly settled juveniles by certain snails, and older juveniles by fish. There are no reported predators on adult Styela clava.

When it occurs in high densities, Styela clava may harm other organisms by competing with them for space or food, or by consuming their planktonic larvae and reducing their rates of settlement. In this way it can become a major problem for shellfish aquaculture, and it can also be a nuisance fouler of boat hulls and fishing gear. It has been reported as a significant pest of oyster and mussel farms in Japan and eastern Canada, and in Denmark mussel catches are sometimes so covered with Styela clava that they are unmarketable. In England, oyster farmers have unsuccessfully tried to control Styela clava by manipulating salinity, temperature and air exposure, and by introducing the green crab Carcinus maenas in enclosures. Styela clava has been a significant fouler of gear in the Danish cod, flounder and eel fisheries. On Prince Edward Island, dense growths of Styela clava have weighed down floating docks, making it difficult to remove them from the water. In Japan, Styela clava has been blamed for an asthmatic condition in oyster shuckers, apparently caused by hammering open Styela-fouled oysters in poorly-ventilated work areas.

On the other hand, Styela clava is harvested and eaten in southern Korea, where it is called "mideuduck."

There are two other exotic species and two native species of Styela found in shallow waters on the Pacific Coast which could be confused with Styela clava.

Styela montereyensis, a native species, is the only one of these that resembles Styela clava in attaching to the substrate by a stalk. It is found from British Columbia to San Diego. It grows longer (it's reported to reach over 30 cm long) and more slender than Styela clava, with a relatively longer stalk. Its body merges gradually into its stalk so there is no clear demarcation between them, while some Styela clava taper abruptly. It may also be redder in color than Styela clava, but can vary from yellow or light tan to dark red-brown. The oral siphon in Styela montereyensis has a pronounced curve so that the aperture opens sideways or downward; in Styela clava the siphon is straight and the aperture opens upward. Styela montereyensis has regular ridges and furrows running nearly the whole length of the body which correspond to thicker and thinner sections in its outer skin; while the creases found on the lower portions of some Styela clava are only wrinkles in the outer skin. It has two gonads on each side of its body, unlike the 2-5 on one side and 4-9 on the other reported for Styela clava. It is primarily found on rocky outer shores, but can be large and abundant on protected pilings where there is strong water flow.

Styela gibbsi, another native, is also found from British Columbia to San Diego. It only reaches a length of about 4 cm, and attaches directly to the substrate without a stalk. A small (up to 1-3 cm), unstalked Styela clava could thus be mistaken for Styela gibbsi. However, dissection of Styela gibbsi would show 2 gonads on each side of the body, while a Styela clava of that size would not have any recognizable gonads. Styela gibbsi is primarily found on rocky outer shores, and in southern California is usually in deeper water up to 100 m depth.

Styela plicata is an exotic species reported on harbor floats and pilings from Santa Barbara to San Diego. It is up to 9 cm long, ovoid and stalkless, with a whitish to light brown skin completely covered with lumps and bulges. It generally has fewer gonads than in Styela clava, 2-3 on one side and 4-6 on the other. When they occur in the same bay or harbor, Styela plicata tends to be found further from the mouth, in slower moving waters, than Styela clava (Lambert & Lambert 2003).

Styela canopus is up to 3 cm long, ovoid to globular, stalkless, typically smooth-skinned, reddish-brown in color, with 2 gonads per side. It is easily distinguished from Styela clava. It is probably native to Asia, and has been reported from Los Angeles to San Diego Bay.

Asia from the Sea of Okhotsk, southern Siberia, Japan and Korea along the China coast to Shanghai.

In San Francisco Bay, Styela clava has been collected from the mouth of the bay to San Rafael and Point Richmond in the north and Redwood Creek in the south. It was also collected once in Elkhorn Slough in 1935 and once in Morro Bay in 1972.

Styela clava's first records on the Pacific Coast are in 1932 in Newport Bay and in 1935 in Elkhorn Slough (where a single specimen was collected, and it is no longer present), which are also the first records outside of its native range. Since Styela clava is a common fouling organism in harbors, it may have been transported to the Pacific coast as ship fouling. However, since it occurs as fouling on oysters (Crassostrea gigas) in Japanese oyster farms, and since oysters from these farms were planted in Elkhorn Slough in 1929-1934, Styela clava could have reached Elkhorn Slough in oyster shipments. If it arrived in Elkhorn Slough before 1932, it could then have been transported to Newport Bay as fouling on coastal shipping. While most of its subsequent spread was probably due to hull fouling, some—such as its recent appearance in Humboldt Bay (Boyd et al. 2002)—could also have been facilitated by transfers of oyster stock from other Pacific Coast sites. Since its larvae spend a maximum of 1-2 days in the plankton, transport either in ballast water or as drifting larvae probably played no more than a minor role in its spread between bays.

Styela clava appears to have been introduced to Europe [1953], eastern North America [1970] and Australia [1972] in hull fouling, since its 1-2 day planktonic larval phase is too short for long distance transport in currents or ballast tanks. It has been suggested that its introduction to Europe at Plymouth, England was via fouling on the hulls of warships returning after the end of the Korean War (Lutzen 1999). Much of the subsequent spread within these regions was probably also accomplished on boat or ship hulls or on fouled fishing gear, although a few cases, such as its introduction to Denmark, may have resulted from individuals attached to oysters transferred for culturing.

Bostryorchis clava, Styela barnharti (of Van Name 1945 and others, not of Ritter & Forsyth 1917), Styela mammiculata 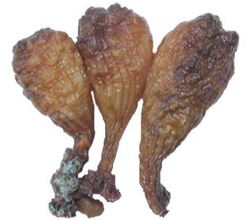 Styela clava collected in San Francisco Bay. Note the stout stalks and brown, bumpy skin. The two bumps at the very top of the middle and right-hand specimens are the inhalant and exhalant siphons.

Three Styela clava hanging from the underside of a rock in large riprap in San Francisco Bay. There are two white barnacles (Balanus glandula) and a gray, flat encrusting bryozoan (Conopeum sp.) growing on the middle specimen. A gray fuzzy bryozoan (Bowerbankia sp.) covers part of the right-hand specimen. A red and black bryozoan (Watersipora subtorquata) encrusts some of the rocks. 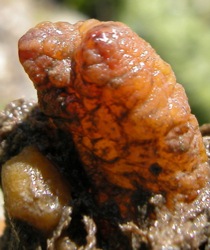 The upper end of a Styela clava on an intertidal rock in San Francisco Bay. 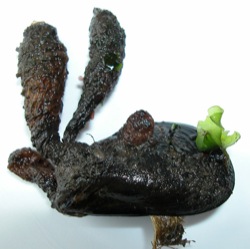 A mussel (Mytilus trossulus-galloprovincialis complex) collected in San Francisco Bay with 4 Styela clava growing on it, the smallest one lacking a stalk. A green seaweed (Ulva sp.) is also growing on the mussel. 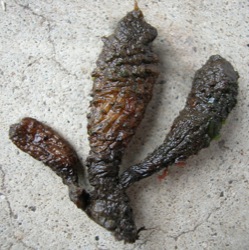 Another view of three of the Styela clava in the previous image, with bits of red and green seaweed growing on them.