Exotic Species on the Pacific Coast of North America

The earliest record of an exotic marine species on the Pacific Coast is an Atlantic Ocean barnacle that was collected in San Francisco Bay in 1853. Recent studies have documented hundreds of exotic species established within the reach of the tides, including 64 exotic species in Puget Sound, 57 in Willapa Bay, 61 in Coos Bay, 66 in Humboldt Bay, 65 in Elkhorn Slough and 106 in southern California bays. However, San Francisco Bay remains the most invaded site on the coast, with more than 175 exotic species established in its salt and brackish tidal waters, and over 75 additional species in the tidal freshwaters of the Sacramento-San Joaquin Delta. Perhaps another 100-200 species are "cryptogenic" in the bay, meaning that we do not know whether they are native or exotic.

More impressive than their numbers is how these species dominate many important habitats. In the San Francisco Bay estuary, exotic organisms dominate the muddy bottom of the bay, the fouling community, the salt marshes in the southern part of the bay, the brackish and freshwater zooplankton, and the freshwater fish in the southern part of the Delta. In these habitats, exotic species account for over half to nearly all of the species, individuals, and biomass.

Furthermore, new species are arriving in the San Francisco Bay estuary at an exponentially increasing rate, from an average of one new species established every 55 weeks between 1851 and 1960, to one every 14 weeks from 1961 to 1995. In the decade from 1986 to 1995, 43 new exotic species were discovered in the estuary, with at least 33 of these becoming established.

Several mechanisms have been responsible for transporting exotic species to Pacific Coast waters. Seaweeds, sponges, barnacles, clams, worms and other organisms have traveled as "hull fouling," attached or clinging to the hulls of ships. boats or barges. A few species—including shipworms (a type of highly-modified clam) and gribbles (a group of isopods)—can bore their way into wood, and traveled widely in the days of wooden ships. Other organisms have been carried with ballast, which a ship takes on to adjust its trim or to sink the hull to a proper level in the water when there is little or no cargo aboard, and then discharges over the side when it is no longer needed. Until the early twentieth century, ships typically used solid ballast—rocks, sand or mud—and various shoreline and intertidal plants and animals traveled along with it. Moving rocks in and out of ships is time-consuming and expensive, so modern cargo ships instead use large volumes of water as ballast, which carries huge numbers of phytoplankton and zooplankton (small drifting organisms) around the world.

Much aquaculture, in both marine and fresh water, is based on exotic species. Some of these species are planted and grown out in the environment, while others may escape from the facilities in which they are held, sometimes carrying exotic parasites or diseases. While ballast water moves a much greater number of species, aquaculture is probably a far more effective mechanism for introducing exotic parasites, diseases and other pests of fish and shellfish. For example, Pacific Coast oyster growers began importing and culturing Virginia oysters (Crassostrea virginica) from the Atlantic Coast in 1869, and Pacific oysters (Crassostrea gigas) from Japan in 1902, which resulted in many Atlantic and Japanese organisms (including several oyster pests) becoming established on the coast. More recent types of marine aquaculture (such as salmon and abalone farming) have also released exotic species into Pacific waters.

Other vectors include the international and cross-continental transport and sale of aquarium plants and pets, live marine bait, live seafood, and live organisms intended for use in research and teaching. It is only in recent decades that there has been any general recognition of the impact of exotic species on marine waters, and the regulations and institutional arrangements needed to manage this problem have not yet been developed. Until the "biological pollution" of exotic species is regulated as rigorously as chemical pollution is, we can expect that large numbers of novel exotic species will continue to arrive on our shores.

How they got here: 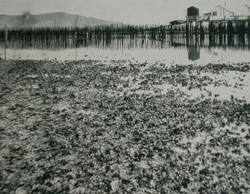 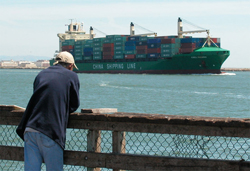 A container ship from China

Heavy fouling on a boat hull 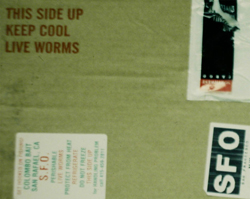 Baitworms traveling across the country 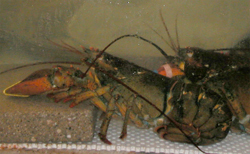