As the largest snail in San Francisco Bay, and the only species in its family on the Pacific Coast, Busycotypus canaliculatus is easily recognized. San Francisco Bay specimens range up to 185 mm in length, while no other snail in the Bay gets much above 35 mm long. The shell has a conical spire and 5-6 whorls (each whorl is one complete turn of the spiral shell). The top of each whorl is flat and slopes gently downward, and has a rounded outer ridge, forming a sort of winding terrace up to the pointed apex at the top of the shell. There is a channel at the inner edge of each whorl where it is attached to the preceding whorl. The aperture (the opening through which the snail emerges) is large, and tapers at its lower edge to a long, open canal. The shell is white or pink to orange-brown. In living specimens, the outside of the shell is covered with a thin, grayish-brown tissue, called the periostracum, whose outer surface is drawn out into a network of stiff hairs. The operculum—the rigid oval plate that closes the aperture when the snail withdraws into its shell—is brown.

Busycotypus canaliculatus is found in subtidal and intertidal areas, buried in or crawling on mud and sand bottoms, where it feeds on young, shallowly-buried clams. It locates buried clams by sensing the water they pump out. To feed, Busycotypus canaliculatus digs up a clam, grasps it in its large foot, and chips away the clam's shell against the edge of its own shell until it makes a large enough opening to insert its proboscis and feed on the clam's soft tissues. Busycotypus canaliculatus also eats mussels and oysters. On the Atlantic Coast, it usually forages on the surface at night in the summer and by day in the winter, and is sometimes a serious pest in clam and oyster beds.

Busycotypus canaliculatus produces distinctive strings of disc-shaped egg cases that release tiny, crawling snails. There are 20-50 eggs per case, and up to about 100 cases per string, which is attached at its end to a rock or other hard surface. Portions of egg strings may sometimes break off and drift, aiding dispersal. A single egg string was collected at Bolinas Lagoon in the 1960s.

Busycotypus canaliculatus was first collected in San Francisco Bay either in San Francisco in 1938 (the record is unclear) or at Alameda in 1948. Since it occurs in oyster beds on the Atlantic coast, it may have been accidentally introduced with one of the later shipments of Atlantic oysters. Busycotypus canaliculatus are sold as “pear conchs” on the East Coast, where they are used in Italian and Chinese cuisine. They are also shipped to the Bay Area and are frequently available alive in Chinese groceries. If these live food imports started early enough, releases or discards from grocery stocks could have been the source of the Bay population. They might also have been released from a private or school aquarium. 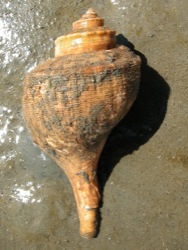 Busycotypus canaliculatus from San Francisco Bay. Note the conical spire; the sloped top of each whorl with a rounded outer ridge; and the thin tissue (called the periostracum) and network of stiff hairs that cover part of the shell. 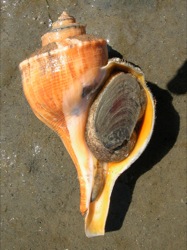 Same specimen as in the previous image. Note the large aperture tapering downward to a long, open canal, and the brown operculum that closes the aperture.

A Busycotypus canaliculatus ploughing through the mud at Crab Cove in Alameda. 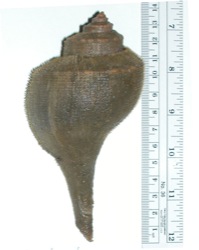 A live specimen of Busycotypus canaliculatus from an Oakland Chinatown market. Note the periostracum with stiff hairs. 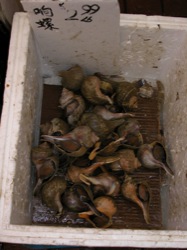 Busycotypus canaliculatus for sale in an Oakland Chinatown market. 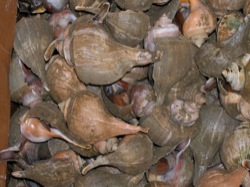