Botryllus schlosseri is a colonial sea squirt that typically forms flat sheets 3-4 mm thick and up to 10 cm across. Colonies that overgrow narrow-bladed seaweeds may appear lobate, and colonies growing in stalked, fleshy lobes have been reported in southern Australia. Botryllus schlosseri grows on a variety of surfaces, include docks, boat hulls, buoys, ropes, pilings and the undersides of rocks, and on mussels, solitary sea squirts, seaweeds and eelgrass (Zostera marina), and they often do well in polluted waters.

Each colony consists of many small individuals called zooids, that are arranged in circular, oval or star-shaped clusters called systems, within a clear, firm, fleshy matrix. Each zooid pumps water through its body, filtering out food particles. As described below, all the zooids in a system discharge their filtered water into a common space within the matrix, from which it exits the colony.

A single system is 5-10 mm in diameter, and may have up to about 20 zooids. The zooids themselves are about 2-5 mm long and oval to tear-drop shaped, with the narrower end pointing toward the center of the system. The zooids can be orange, yellow, red, white, gray-green, purple, dark gray or black, or certain combinations of these colors, though all zooids within a colony are the same color. Networks of transparent blood vessels running through the matrix have numerous dead ends that are visible as small pigmented blobs embedded in the clear matrix between the systems and around the edges of the colony.

The following details can be seen with a microscope and some dissection. At the top of each zooid there is a small opening, called the oral aperture, with 16 small tentacles around the inside of the opening. Water enters through this opening into a sac that occupies much of the zooid's interior. The sac is pierced with holes, called stigmata, that are arranged in 8-12 (usually 9-10) horizontal rows. As water passes through the stigmata, the zooid captures food particles on a sheet of mucous that is then ingested, and absorbs oxygen from the water. The water leaves the zooid through a gaping opening, called the atrial aperture, into a central common space that receives water from all the zooids in a system, and then exits the colony though a central pore.

Colonies typically mature after 1-2 months, and reproduce in spring and early summer. Temperatures of at least 11°C and salinities of at least 25 ppt are needed for reproduction. During its reproductive period, which lasts up to 10 weeks, a colony can produce up to 8,000 eggs. The eggs are retained within the colony where they develop into tadpole-shaped larvae with 8 finger-like buds, called ampullae, on the head end. When released from the colony a larva spends less than a day in the water column before attaching head-down onto a firm surface. The settled larva metamorphoses into a zooid, which buds off others to the sides to form a colony. Colonies in Monterey Bay can grow up to 1,400 zooids in 10 weeks. Colonies that develop from larvae that settle in the spring live for about 3 months and those that develop from fall settlers live for about 8 months, though colonies kept in the laboratory have survived for up to 7 years (Chadwick-Furman & Weissman 1995). Botryllus schlosseri's temperature and salinity limits are interrelated, but high mortality has been reported below 3°C and 16 ppt and above 44 ppt.

Crabs, snails and flatworms have been observed feeding on Botryllus schlosseri. Botryllus schlosseri can overgrow other attached, filter-feeding organisms and compete with them for food. It is a nuisance fouler on boat hulls and equipment, and can overgrow and compete with cultured oysters and mussels and increase processing costs for these shellfish.

In Botryllus species, the zooids are arranged in circular, oval or star-shaped systems. In Botrylloides species, the systems are more elongated, sometimes in long ovals but more commonly in meandering double rows that occasionally branch. Sometimes there are also oval islands of matrix left between these double-rows, which can look like oval systems, except that the narrow ends of the teardrop-shaped zooids (where the water is discharged through the atrial apertures) point away from the center of the oval and toward the center line of the double row of zooids, while in an oval system they point toward the center of the oval. In addition, small pigmented blobs that are the ends of blood vessels are sometimes visible in the center of these ovals, indicating that they are islands of matrix rather than the centers of systems. The larvae of Botryllus schlosseri, with 8 ampullae, can also be distinguished from those of the common species Botrylloides violaceus, which have 24-34 ampullae.

Another Botryllus reported from the Pacific Coast is the rarely seen Botryllus tuberatus. Compared to Botryllus schlosseri, this species has smaller zooids (about 1 mm long rather than 2-5 mm), fewer stigmata rows (4 rather than 9-10) and an atrial aperture that is drawn out into a spoutlike tube, rather than a gaping opening.

Generally considered to be Europe, including records from the Faroe Islands, southern Norway, Great Britain, western France and the Mediterranean, Adriatic and Black seas, though some question whether it is native outside of the Mediterranean.

Botryllus schlosseri may have been introduced to the Pacific Coast more than once. Botryllus species are common in hull fouling, and this is the most likely mechanism for introducing and spreading Botryllus schlosseri on the Pacific Coast and in other parts of the world. At some Pacific Coast sites, however, it could have been introduced with shipments of Atlantic or Japanese oysters (Crassostrea virginica and Crassostrea gigas), either from abroad or from other oyster farms on the Pacific Coast. This is likely how it arrived in Puget Sound, where it was first discovered at an oyster farm (Lambert & Lambert 1998). Since Botryllus schlosseri's larvae spend less than a day in the plankton before settling, transoceanic transport in ballast water is unlikely, although small colonies might possibly be carried in ballast tanks on bits of floating debris.

Its date of arrival is uncertain. A botryllid sea squirt, possibly Botryllus schlosseri, was recorded in San Francisco Bay on fouling panels at Mare Island and Hunters Point in 1945-47; and Botryllus schlosseri was common in San Francisco Bay and Bodega Harbor by the mid-1970s. It was found at an oyster farm in Washington state in the late 1960s or early 1970s, where it was likely introduced with oyster spat. It was reported in Humboldt Bay in 1992, but Boyd et al. (2002) suggest that it had been present since the early 1970s. It was not reported in reviews of southern California sea squirts by Ritter and Forsyth (1917) and Van Name (1945), but was common in the San Diego area by the early 1960s.

Common on the Atlantic Coast of North America, where it ranges from southern Maine and occasionally the Bay of Fundy to Florida and the Gulf of Mexico. Although Ekman (1953) suggested that its occurrence on both coasts may be due to transoceanic drift on seaweed, Van Name (1945) believed it to be native to Europe and introduced to the western Atlantic in ship fouling. Carlton and Ruckelshaus (1996) also listed it an exotic species in southeastern Florida. Introduced to Mar del Plata in Argentina [reported in 1964], Japan, Hong Kong, many locations around Australia [collected in Western Australia in 1905], Tasmania and New Zealand [reported by 1928].

Boyd, M.J., T.J. Mulligan and F.J. Shaughnessy. 2002. Nonindigenous Marine Species of Humboldt Bay, California. Appendix B in: Report to the Legislature: A Survey of Non-Indigenous Aquatic Species in the Coastal and Estuarine Waters of California, M.E. Ashe (ed.), California Department of Fish and Game, Office of Oil Spill Prevention and Response, Sacramento, CA.Carlton, J.T. 1979. History, Biogeography, and Ecology of the Introduced Marine and Estuarine Invertebrates of the Pacific Coast of North America. Ph.D. thesis, University of California, Davis, CA (pp. 736-737).

Lambert, C.C. and G. Lambert. 2003. Persistence and differential distribution of nonindigenous ascidians in harbors of the Southern California Bight. MEPS 259:146-161. 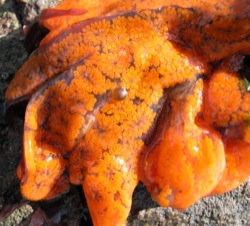 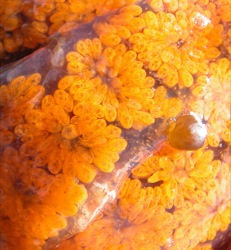 Detail of colony in previous photo. 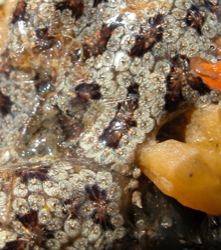 A Botryllus schlosseri colony with white and black zooids, growing over the surface of a solitary tunicate (probably Ascidia sp.) in San Francisco Bay. 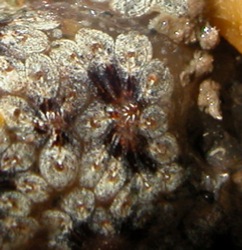 Detail of previous photo showing a system made up of 12 zooids. Note the red-tinted oral apertures on the top surfaces of the white zooids, and the opening in the center of the system where water exits the colony. 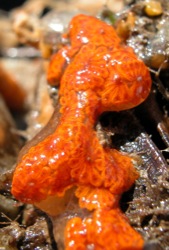 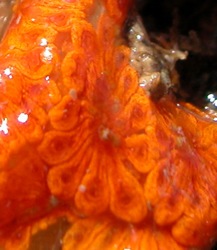 Detail of previous photo showing a system made up of 12 zooids. Note the oral apertures, appearing as darker orange pores in the teardrop-shaped zooids. 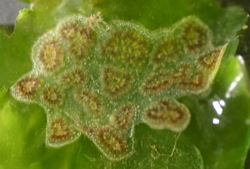 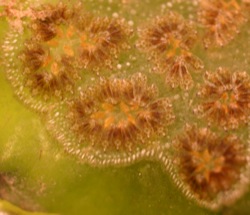 Detail of colony in previous photo. Note the small white blobs arranged like beads around the outer rim of the colony, which are the pigmented ends of blood vessels. 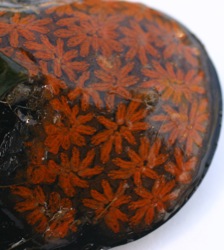 Detail of colony in previous photo, with systems of 5-13 zooids. The zooids are unusually long and slender. 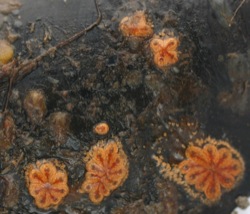 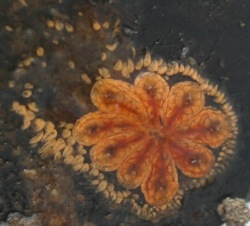 Detail of a colony from the previous photo, with many small oval blobs around the outer rim of the colony, which are the pigmented ends of blood vessels.